Rising from the ashes of The Human League Mkl, Heaven 17 came soaring into the wild blue yonder of pop music on March 13,1981, with their debut single, the much acclaimed, promptly banned (by auntie Beeb), and astonishingly sophisticated, (We Don't Need This) Fascist Groove Thang. Making a first single like that was something of an achievement, but the three members of Heaven 17 ably assisted by a number of notable musician friends, then went on to excel themselves further with their tremendously popular debut album, Penthouse And Pavement.

Heaven 17 are Martyn Ware, Ian Craig-Marsh and Glenn Gregory. Martyn and Ian were both refugees from The Human League, which split down the middle in October, 1980. Both of them were former computer programmers and operators in Sheffield and both of them had insatiable appetites for knowledge of a musical and technological nature. Glenn Gregory, the blonde tall one, had missed being in The Human League by 300 miles. He was in London when they were in Sheffield. He was a photographer, then a stage hand in the theatre before Martyn and Ian, seeking a singer for their newly conceived trio, sought him out. Thus Heaven 17, and its management and administration arm, the British Electric Foundation (B.E.F.) were formed. Heaven 17 take their name, by the way, from a fictitious combo mentioned in Kubrick's classic film 'Clockwork Orange'. Heaven 17 followed the auspicious debut mentioned above with rm Your Money in May of '81, then Play To Win in August. In October, Penthouse And Pavement arrived and confirmed everyone's wildest exceptions. But that major hit single still elude our brave heroes. 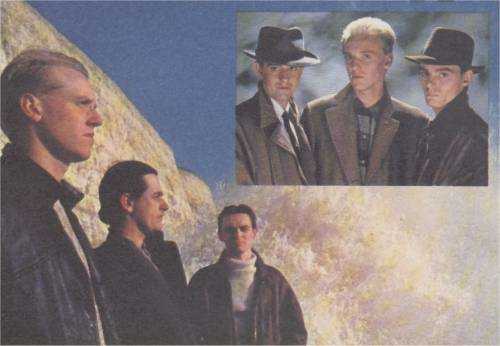