HEAVEN 17's corporate image - business suits 'n' briefcases - might have been a touch tongue in cheek. But, there were times in the distant past when the group's Martyn Ware preferred glatter and lurex to pinstripe. Vocalist Glenn Gregory spills the eye make-up.

"I remember when Martyn used to be the most outrageously dressed man in Sheffield. He lived on a rough estate, and we used to call round for him to bodyguard him out of the area. "One of his most famous outfits was this bright green fun fur jacket that was far too short for him and just about came up to his navel Martyn remembers. "This was in the days of glitter and Bowie and all that." "He had very very tight trousers", continues Glenn. And really enormous shoes, "Platform boots," corrects the sartorially correct Mr Ware. "Platform boots", concedes Glenn. "And lurex tops he was very big on lurex at that time. We Were sure he Was going gay" "Actually, I could have got into Twisted Sister", says Martyn. "I had a great diamante cat collar." "We don't do any of that now", Glenn says with some regret. "Martyn dresses up very conservatively these days." 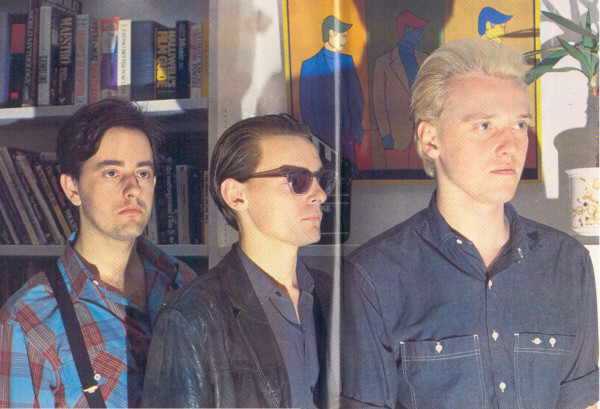 Aah, the screeching guitars and high camp of glitter rock seem a long way from the streamlined tech'n'soul of Heaven 17. The Sheffield group currently scoring their first major hit with 'Temptation' are a prime example of the new pop technocrats.
Essentially a studio group, their work is born of its age and yet informed by a loving regard for classic American soul. Heaven 17's music has none of the bogus 'modernity' of say an Orchestral Manoeuvres, but is based upon the struggle to master and understand technology, not deify it.
However, at times this approach can appear cold, distant. Are Heaven 17 technicians or musicians ?
"A bit of both," says Martyn. "Ian's more a technician than musician. I'm more musician than technician. Glenn ? - I give up!"
Ok, what about the way you mix the most modern technologies with some of the most traditional soul vocals?
"We're not aiming to make soul records at all. It is that juxtaposition of ideas that we're after," says Martyn. "If we wanted to make a authentic soul record we would get a live band in. We'd get Virgin's A&R man to ring up a few agencies and we'd audition musicians."
Why don't you play live ?
"It's not something we enjoy particularly," says Ian. "Not as much as creating new songs. From Martyn's and my experience with The Human League - you enjoy the first couple of concerts maybe - it's quite fun. It's just that everything that goes with it drives you mad."
Fair enough, but what feedback do you get about your music ? Playing a song live surely helps you to understand its strengths and weaknesses. It tells you how other people react to your music.
"It depends on how you define live," says Ian. "Our records are very popular in nightclubs. So when we go to nightclubs we get the feedback from that."
"Playing live and performing in the studio are two entirely different things," says Martyn. "They're two entirely different disciplines. For a normal rock band, all they have to do is to go to a rehearsal room after a tour and jam away, blah, blah, blah. Go to the studio - wonderful, it's all very spontaneous, but it comes out sounding like another rock band. And I don't like rock bands."

Aha, this traditional rock image. Heaven 17 are very strong denying their links with 'rock' tradition. They're not a band but a company. They create new music for new lifestyles. Woe betide you if you drag their name in rock's mucky pool.
"The thing is that people never really understand us," says Martyn, "'Cos we've never really had any traditional rock background at all. The old Human League was one of the strangest groups you'd ever meet. 'Cos we just had no basis in any sort of traditional rock values at all. And Heaven 17 hasn't either. We're coming from a totally different direction."
Hmm, there was me thinking that the old Human League covered Gary Glitter and Righteous Brothers songs. Never mind, the creation of BEF has allowed Ian and Martyn to subtely distance themselves from their work. But not tying themselves up under a group banner they're able to undertake new projects, able to hire their talents.
"We distance ourselves deliberately" says Ian. "'Cos that's the only way we can allow ourselves to work in different areas. It's a much more sensible way of working. You imagine, for instance, the BEF album - 'Music Of Quality And Distinction' - didn't sell a lot. It sold enough to cover its costs. If we'd released an album like that as Heaven 17, then all of Heaven 17's records would have been adversely affected by the failure of that album. I remember at the time people saying we'd backed ourselves into a corner, but how could we have backed ourselves into a corner ? Heaven 17 was still intact. It's only a way of organising your affairs. It makes it a whole lot easier to do other things."

"I think it is really strangely tacky for them. 'Cos Philip was going on so much about control and how we wouldn't let things out. And it's so obviously not quite finished."
With the new Heaven 17 album - 'The Luxury Gap' - being released this week, Heaven 17 are in for a busy time. Promotional tours of Europe and America are being lined up as the band get ready to reap the rewards of their steadily growing dance-floor following.
Compact and highly mobile, Heaven 17 are one of the more interesting new pop propositions.