An offshoot of the British Electric Foundation, the pop group-as-corporation established by Martyn Ware and Ian Craig Marsh after splitting from The Human League, Heaven 17 were designed as BEF's vehicle for chart subversion. "Fascist Groove Thang" was their first musical salvo, with fellow Sheffield boy Glenn Gregory crooning smoothly atop the jagged white funk of the players. The track came at a time of a schism in the music press between the New Romantic/revolt into style/New Pop brigade and the more austere post-punk agit-poppers who felt fun and dancing had no place in a world lurching terrifyingly to the Right. "Fascist Groove Thang" was an impassioned, yet oddly facetious, attempt to reconcile these opponents. With a demented backbeat and rolling keyboard riff, it came on like an emergency conscription of nightclubbers, and the lyrics ("Hitler proved that funky stuff / Is not for you and me") seemed deliberately gauche. It was played to death in its days, though even revivalists tend to overlook it, uncertain what to make of it. 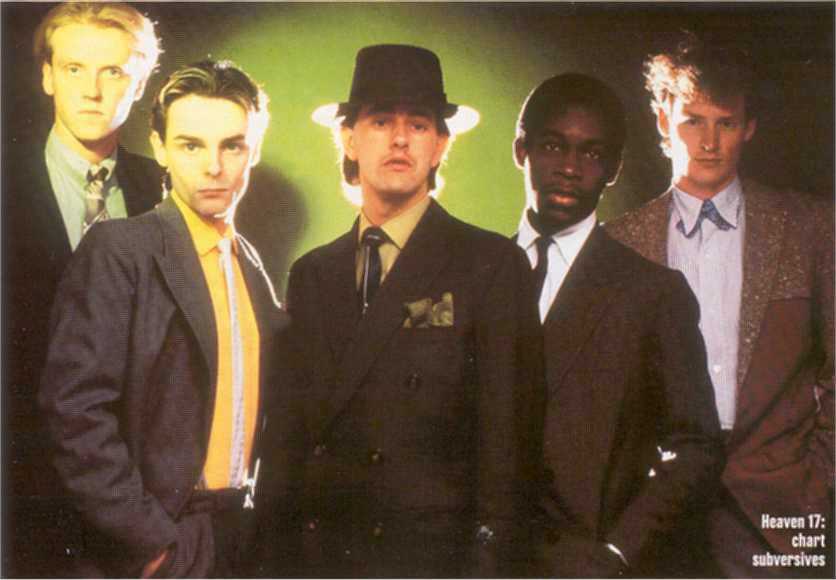 Additions from mails for this picture :

Remarks by Andy Millington : the black guy pictured in the Uncut top 100 photo is John Wilson, the guitar vituoso first introduced on "Penthouse & Pavement" and then subsequently "The Luxury Gap" and "How Men Are" (he gets a joint writing credit with the boys on "How Men Are" for the song "Reputation"). The last time I know of him working with H17 is on the "Pleasure One" LP track "Move Out". I've no idea who the other guy is but considering the picture was taken around the Penthouse time it could be 'Engineer and Assistant to the Producers' Pete Walsh. Then again this is only a guess. It could just as well be a 'Boy Of Buddha' about to play his Synthetic Horn!

The identity of John Wilson is now confirmed by Glenn Gregory himself !