"l knew The Human League were about to break. We'll take a lot longer but we'll do it in the end."

So said lan Craig Marsh to Smash Hits back in September 1981. Twenty months, one LP (excluding the "Music Of Quality And Distinction" opus by BEF) and a clutch of singles later, they have finally secured a Top Twenty hit with "Temptation". Not surprisingly, Heaven 17 are extremely pleased.

Once again they've brought in a female voice to offset Glenn's booming baritone and this time the Job feil to Session singer Karol Kenyon whom they found through Rusty Egan (that was Karol, by the way, on Top Of The Pops).

They used the same designer, Ray Smith, for the LP sleeve. The front has the trio standing by a posrerof an exotic, palm-studded Island (could it be somewhere like Sri Lanka?). Behind the poster - on the back of the sieeve, that is - lies a grirny industrial wasteland.

"That's meant to be a dig," explains Martyn Ware," at the whole hypocrisy of us being in an economically depressed country in which 15-year-olds can barely afford to live and yet they're sold the fantasy life of a pop star through bands like Duran Duran who are prevalent at the moment." The gap between luxury and reality, in other words. 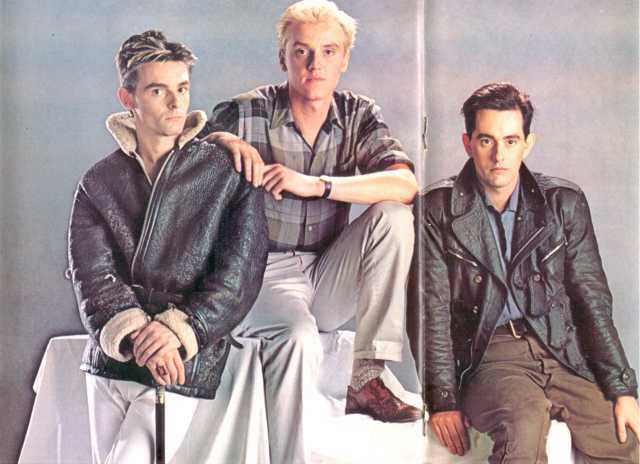 But don't think that Heaven 17 spend every waking hour grappling with such ponderous matters. Behind the theories are, as Martyn laughs, three "good, northern working class blokes" Their conversation constantly crackles with fun and well-intentioned criticism as we sup a lunchtime lager.

Martyn generalty Starts a new song "hammering away at not very complex chords on a Casio keyboard while lan and Glenn play poöl for three hours". He's also the one "who sits at the heim while we're mixing and keeps the other two under control, although lan doesn't need it because he's asteep most or the time".

As well as an extraordinary ability to sieep in the Studio, lan apparentty has a huge appetite. Or so says Glenn: "lan eatsmore than any other man can eat. A typical snack would be about four tuna and mayonnalse toasted Sandwiches, one tuna untoasted, three egg and mayonnaise untoasted, four Picnics and a Kit-Kat. (t's no exaggeration!"

lan comes to his own defence. "l suppose my forte is on the technical side. l end up reading the manuals and explaining them to the others who don't like reading much."

Martyn chips in: "lan is the random factor. If there's a Oevo factor in the group, it's him."

By common consent, Glenn is the group's jester. "In the Studio especially, l take it upon myself to relieve any fraught situations. You know, cheap laughs like the waste-paper basket on the head trick, taking your trousers down and spilling a drink down your front, l tend not to take it as seriously as Martyn and lan."

His "pranks" can sometimes literally backfire. Take the time when they had been working in the Studio non-stop for 36 hours. Tension was high and Glenn knew he had to do something to ease the atmosphere. He took the band's mascot, a curious plastic skull inscribed with the words "Keep Music Dead", and thumped it with a snooker cue.

"In the process," he roars, "the lead in the cue shot out and went straight into a £500 plate-glass, double-glazed window. l wasn't incredibly popular. That was an accident. l don't normally go round smashing up Windows."

And let's not forget the Philip Oakey story . . .

"No, no, l veto that," bellows Martyn. "This story's alt right," smirks Glenn.

To relieve another anxious moment, Glenn cut out a picture of Philip and sellotaped it onto the face of a particularty dour news-reader who happened to be on telly at the time. But why?

"Because it looked funny."