CHAIRMEN OF THE BOARD 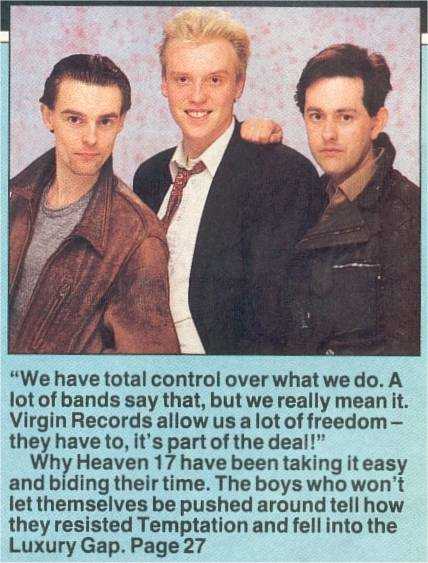 How to make a million without really trying. First quit a going concern -The Human League- but retain a share of the profits. Second, form a brand new company -Heaven 17- and make a takeover bid for the charts. Shrewd businesswoman Karen Swayne takes notes on the back of her overdraft. Pavement artist Mike Prior takes penthouse pictures.

There are those who will try to convince you that it's a tough life in the music business these days.

You've heard the complaints - there's no money to be made, any hard earned pennies that do filter through are pocketed by the taxman, and, all in all, it's a pretty hard task keeping body and soul together.

"Basically, the reason we're In this business is to earn money," admits Martyn with disarming honesty. "We've made enough to get the lifestyle we're happy with, and we Intend to keep it."

Chances are he'll get his wish, for when these two canny Sheffield lads split from the Human League a couple of years ago, they made a deal selling their rights to the League's name In return for a percentage of future group earnings. Then they sat back and watched the royalties flooding In-even though they had nothing to do with the new group!

The worldwide success of the League's 'Dare' album gave them a guaranteed income without having to lift a finger. And it left Marsh and Ware free to devote their energies to their new band, Heaven 17.

Along with amiable blond vocalist Glenn Gregory the two also work under the title of the British Electronic Foundation, an organisation they set up to allow them the freedom to work on other projects.

So far the results of this union have been fairly few and far between. But with Heaven 17's hit single 'Temptation' featuring the glorious vocals of Karol Kenyon and a new album, 'The Luxury Gap', the three are back in the public eye.

"We didn't Intend for there to be such a gap (!) between our albums," says Martyn (Heaven 17's classic debut LP 'Penthouse And Pavement' was released two years ago), "but we've been busy with other things."

One project which took up a lot of their time was a BEF release which went under the name of 'Music Of Quality And Distinction'.

This album, made up entirely of cover versions sung by artists like Gary Glitter, Sandie Shaw and Paula Yates, came out last year. It was originally intended to be the first of a series of similar discs, but didn't sell as well as the trio had hoped. 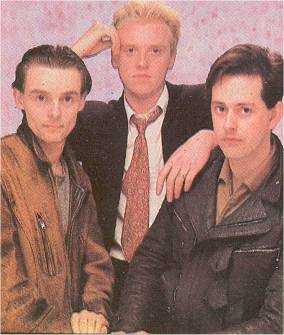 "It didn't do disastrously," says Martyn, "but as the record buying public obviously didn't find the idea that fascinating we can't really justify the cost of making another one."

Instead, they've spent the time since then working on material for 'The Luxury Gap'.

"We spent months in the studio doing demo tapes," says Martyn, who does most of the talking. "The only way we can work Is under pressure, so we wrote a lot of songs in the studio.

"It's a very expensive way of doing it, but we like it that way, even though it does cost a fortune.

"We're not a traditional pop group In the sense that we don't sit in a rehearsal studio and jam until something occurs to us."

Heaven 17 make another break with tradition by refusing to play live. The only exception to this rule was their appearance on the first edition of The Tube.

"They kept having shots of my bum when Glenn was singing!" laughs Martyn.

"They're a very arty lot at Channel 4," adds Glenn sarcastically.

Instead of treading the boards, the trio put in a series of personal appearances where they sang vocals over backing tapes.

It was something of a disillusioning experience however.

"We won't do any more," declares Martyn, "because the club managers were just using them as an excuse to rip off the people who came."

"The PAs were being advertised as live gigs and they were doubling the admission prices so there were a lot of disappointed people who'd gone along expecting to see a band."

If they have their way Heaven 17 will never do a tour.

"It is a good feeling being onstage," admits Martyn, "but both Ian and I played loads of gigs with The Human League, and these days you just don't need to do !t to be successful.

"We're not Into the Idea of life on the road. It's not IIke we're some heavy metal band who enjoy hotels and groupies and all that - I'm quite content with my life, and there's no way I'm going to disrupt it If I can possibly help It." 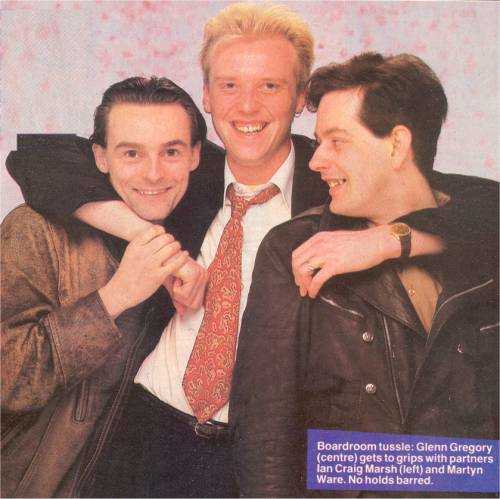