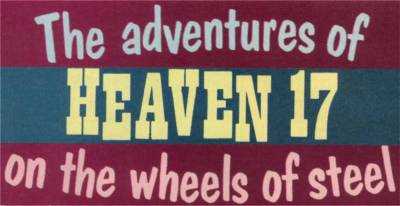 WHILE THE rest of 1983 hasn't been exactly a vintage year, Heaven 17 have certainly made a significant contribution to making it memorable.

The first nine months of this year have seen Martyn Ware, Ian Craig Marsh and Glenn Gregory burst out of cult status into national acceptance with songs like 'Temptation' and 'Come Live With Me'.

Their new single, 'Crushed By The Wheels Of Industry', provides the perfect excuse to delve into their lives in the steel city of Sheffield. 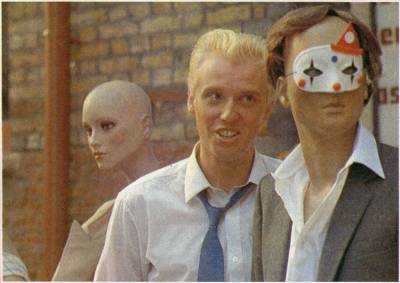 Did your parents have any ambitions for you?

Glenn Gregory: "My parents were happy as long as I kept out of manual work. My Dad worked all his life in the steelworks - and to this day I don't know what he did. He was a shop steward. He seemed to spend all his time in the pub or feeding about 50 wild cats that hung around the works. He was quite a: sharp character. He'd have people moving here and there and always seemed to be home two hours after he left for work. They'd all have somebody covering for them. He got made redundant and now works as a museum attendant."

Martyn Ware: "My Dad's fantasy was to have an office job because he used to have to stand up all day as a tool grinder in an engineering firm - not a pleasant job." Ian Craig-Marsh: 'My Grandfather used to work in a steelworks and he got badly injured when some molten steel splashed in an accident. Now he has some ridiculous scars on his chest. In fact, it doesn't look like a chest - there's some weird white flesh and it's all wrinkled. My Mum works at Bassett's - the liquorice allsort makers. In fact, everybody in Sheffield has worked at either Bassett's or Bachelors at some time in their lives.'

What were your ambitions before you got into music? Was it a treadmill from school to factory?

Glenn 'My ambition was to do something I s actually enjoyed doing. But I didn't get that ambition until I'd been through a few jobs and realised that t couldn't handle that for the rest of my life.'

Martyn: "it wasn't ambition as in get to earn a lot of money - which is how they interpret it in London - but more that you had to make something out of your life. You could see evidence all around you of what happens when you don't."

What sort of things?

Martyn "Memories of youth. It sounds ridiculous - like the four Yorkshiremen sketch in Monty Python when they try to prove how poverty stricken they were as kids. Things like back-to-back houses, outside toilets and no bathroom, no electric or gas ovens but a coal fired range. My Mum, Dad, brother and myself all sleeping in the same bedroom till I was eight. It's embarrassing to talk about it because people think you're exaggerating. "

What's the worst job you ever had?

Martyn: "Boning bacon at the Co-op! You had to carry ä01b sides of bacon over your shoulder with bacon grease running into your ear. It was freezing cold - just out of the freezer. Then take the bones out." Glenn: "I got the same job after Martyn left without knowing until I saw his name on my locker. "

Martyn: 'I nearly cut my finger off. To clean the slicer you have to have it running and take the guard off. I still have a scar where it bit right into my bone. I actually fainted when I saw all the blood gushing out. I never knew a finger had that much."

Glenn: "My worst job was in the young persons department at Moss Bros. I only stuck it for four days. I couldn't stand being shouted at by the customers. One woman asked me to look after her daughter, who was obnoxious. She started pulling my shelves apart so I shouted at her. The woman and my guv'nor came and gave me a mouthful. I didn't turn up next day They still owe me four days money. My Dad was furious - he bought me a suit specially.

Ian "Its got to be peeling spuds for a fish and chip van. Three nights a week in the middle of winter I had to peel two dustbins full of spuds. The easy part was putting them into the machine. Trouble was, the sacks were unprotected from the weather so the potatoes went rubbery. I had to examine each one for bad bits and eyes. The water I put it in was freezing because we were in a garden shed with no heating. My hands used to go purple with cold after ten minutes."

With the success of the Human League, Def Leppard, yourselves and more recently Cabaret Voltaire, it seems that music is a way out of that treadmill in Sheffield. Do you agree?

Martyn. "The major factors are boredom, lack of prospects and just enough facilities to make something of yourselves. There are just enough venues in Sheffield to sustain new groups That's why young groups from smaller places hardly ever make it because they ve nowhere to play. While in London there's not as much incentive to do anything. It's much easier to knock around and see things and take it in than be the ones doing it ..

I've found your corporate image, as used on the 'Penthouse And Pavements' album, quite intriguing. Just how serious was it and how much was image?

Ian "It was born out of necessity. After we left the Human League and saw how bands worked it seemed an obvious way to approach record companies and organise our talents. Looking back on it it might have been bad because people have taken it seriously and see us as hard businessmen where in reality we are just protecting our interests.`

Martyn 'What's confusing is that in one sense it is deadly serious because it is real with our production company. British Electric Foundation. and Heaven 17. But in another sense we are taking the piss because what is genuinely funny is the way the record business works ... and frightening ' 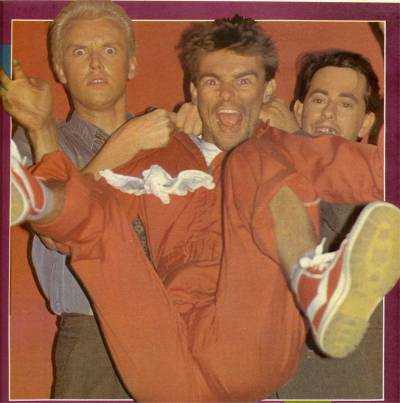 Martyn `It's all based on subjective opinion. For instance, the job of an A&R man (talent scout) is totally spurious. How can you say one person makes a better one than another?"

Martyn: "When you've passed the technical side of music making and get to the artistic side you stand or fall on the opinion of one or two people - it's purely arbitrary."

Everybody had you written down as the bright hopes of the eighties after '(We Don't Need This) Fascist Groove Thang' - your debut single - why has it taken over two years to fulfil that promise with hits?

Martyn: "We made a policy decision at the end of 1982 that we would concentrate wholly on Heaven 17. We have a tendency to shoot off in other directions."

Including of course, 'Music Of Quality And Distinction' where you produced many 'name' performers like Gary Glitter, Tina Turner and Bernie Nolan. How do you feel about the criticism the album attracted?

Martyn: "I thought it was unfair. At least it was different and we put a lot of effort and money into it. It just encourages you not to take risks."

Is America beckoning - as it has done to much of British talent over the past year? Martyn "We've got a foot in the door. 'Let Me Go' was played on MTV - the cable TV pop channel - a lot. But it doesn't really matter to me."

Ian "I think it matters but were not going to break our backs doing it We we sold half a million records of 'The Luxury Gap' album worldwide while Def Leppard have sold 4 million But they we done that by gigging nearly every night in America and they re hardly known over here."

Will you be doing live work soon?

Ian: "We don't want to play live at the moment. It's out of the question in the foreseeable future. We had enough of it in the Human League. The record company told us that the only way to break ourselves was by touring. All we got was a giant debt - all lost through touting. Now we we proved that theory wrong.'"

Martyn "Also with BEF we we got so much else to do It s not like we've got to do one album a year and the rest of the time we might as well be touring And 90 per cent of the other things to do are a damn sight more creative than playing live."

"She wanted us to do a white rock song and we told her she'd got the wrong people. She just left it up to us. She's got a reputation as a bit of a soul screamer so she's always given songs that have to be belted out. We got her to do Al Green's 'Let's Stay Together'. She's rarely pleased with what's done but she told us that it's the first time she's been given a song with such a wide emotional dynamic range. it's incredibly flattering. She's had 20 years in the business and worked with people like the Stones. Phil Spector and others. We just sat In the studio and laughed. To think we're being paid to do this..."