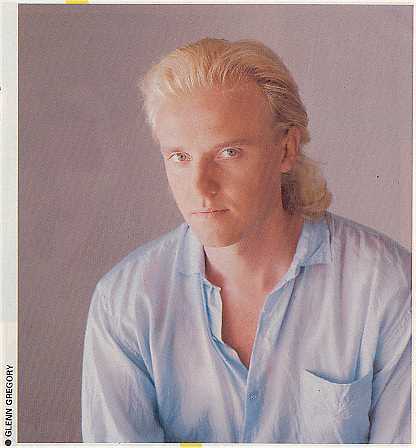 RITA IS sitting on the knee of an attractive blond. Small and pretty, she is enjoying life. Unlike so many you interview, she has no complaints about record companies, is unconcerned about her position in the charts, and couldn't care less about her image.

She jumps off the knee on which she is perched and bounds excitedly round the room, her tongue hanging out as she salivates gently. Rita, you see, is a dog, and this is an interview with Heaven 17.

"Is there a better comedian on television than David Coleman?" demands Martyn Ware. Glenn Gregory (the attractive blond) shakes his head.

"Absolutely," he answers. The three men of Heaven 17 are seated around a table. Rita (Glenn's Yorkshire terrier) is seated ON the table. Martyn and Glenn are loquacious in the extreme, Ian Craig Marsh (if your middle name was Craig would you boast about it?) sits mainly silently in the middle. If he opened his mouth he might have to stop sucking his. cheekbones in prettily, which is perhaps why.

"David Coleman," Martyn says again, "the other, night he came out with 'Now he's holding on to his private members'. I don't know what it was about, but I was sitting there thinking 'Did he actually say that?'."

Martyn then treats everyone to his impression of the great man himself. It's dangerously good.

"And those competing are the famous... and the unknown," he barks, profundity being, of. course, Coleman's trademark. Who can forget the man's immortal "And there's the Scottish defence exposing themselves in the air again"? Nor even "As Burns kicks the ball he drops his head and watches it roll into the back of the net". 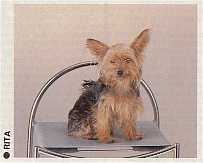 POETRY... SHEER and unadulterated. Which, strangely enough, is something Heaven 17 have been indulging in themselves recently. It all concerns the film 'Electric Dreams' and a song they submitted for the soundtrack.

"We actually wrote two songs," Martyn explains, "one of which was omitted from the final film. In our opinion, it was a good deal better than the one used" (Jeff Lynne's 'Let It Run').

"The brief you got," explains Ian, "was for the computer to draw on its surroundings, TV ads and such - but it gets it all wrong."

"Ours was a good deal more amusing and bizarre than the original," continues Martyn. "The one the computer actually writes sounds like every ELO track ever written. Ours was totally moronic."

"in my heart there is a fire burning very bright. Love is very beautiful, burn yourself tonight. Lay your legs against my arms,"

(though there was some confusion about this line). "My heart is thunderstruck. That's the power of my love - enough to crush a truck. "

"What could be more powerful," answers Martyn, "than the feet per square inch of a truck hitting a wall?" Quite.

According to Glenn, though, the rejection of the tune probably turned out to be a blessing in disguise.

"God only knows we wouldn't have wanted that to come out as a Heaven 17 track - even under a pseudonym. It had this bizarre racket going on in the background and then a banjo comes in. In fact it was really hard to write a song that bad."

"Obviously," says Martyn, "with 'Electric Dreams' it was just gratuitous - totally to sell records of the soundtrack. Look at 'Footloose'. The film bombed but the soundtrack sold millions.

"I'm embarrassed to be associated with it really. It was written in the euphoria surrounding the sentimentality of 'ET', without realising that Stephen Spielberg was the magic ingredient, not some soppy stupid alien, computer or whatever you choose. Anyway, only time will tell." 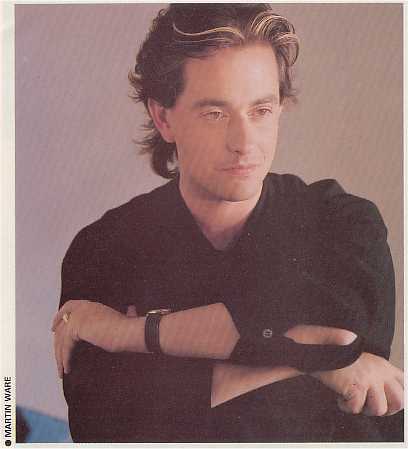 GLENN SUDDENLY pounces on Ian's wrist. He's got a new watch. "It's a jogging watch," he smiles benignly. "You big f*****g ponce!" yells Glenn. Ian grins and his right eyebrow rises high. Such cool. Does this mean Ian is now to be seen jogging around his home in Twickenham, then?

"I'm going to have a sex watch," Martyn bursts in cheekily.

"What," asks Glenn, "to time how long you can do it for? I've got one of those - mine's a 24 hour one... Rita stop drinking tea!" Rita backs away from the mug obediently and the group's manager enters to discuss who they want to appear with them if they get on 'Top Of The Pops'.

"It'd be nice to have a drummer, wouldn't it?" says Glenn, "any old drummer." But does the new single 'Sunset Now' actually have any drums on it?

According to Martyn, though, the people making the programme take it a lot more seriously than Heaven 17 do. "Yeah, if they can't get a decent shot up a girl's skirt they get really angry." 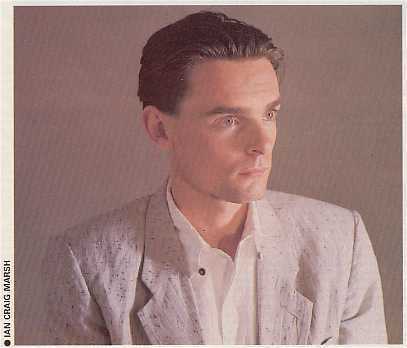 HEAVEN 17 have a new single out and a new album coming up entitled 'How Men Are'. Martyn Ware has just avoided working with Bette Midler ("when you start doing things for money.you know it's gone a bit far") and is now hoping to record with Aretha Franklin.

Perhaps he can do the same with her chart career as he and Glenn did for Tina Turner with 'Let's Stay Together'.

"They needed a contemporary slant to transcend Tina's old audience," Martyn explains, "and to appeal to a new one. Good luck to them. It was a good plan on their part and it didn't do us any harm. I'm pleased for her. And I'm pleased we got two tracks on the album, which has now sold over two million worldwide."

"Can you lend us a fiver?" pipes in Glenn waggishly, who has appeared throughout the interview as perhaps a little 'tired and emotional'.

This view is strengthened when he begins to talk about 'The Last Future Show' which occurred at the Marquee and featured Spizz (where are you now Spizz Energi when your country needs you?) and his Six Little Willies (backing singers, NOT male appendages).

"It was great," says Glenn with eyes glowing joyfully, "it was brilliant. I'll do a review of it for your magazine." Martyn Ware calls in vain for someone to take the singer away, but there ain't no stopping him.

"Spizz and the Last Future Show," the blond one proclaims. "Phew, what a scorcher! Here I am at the Marquee. It's hot. It's very hot. I've got my camara round my neck and my glasses on my nose so I can see everything there is to see.