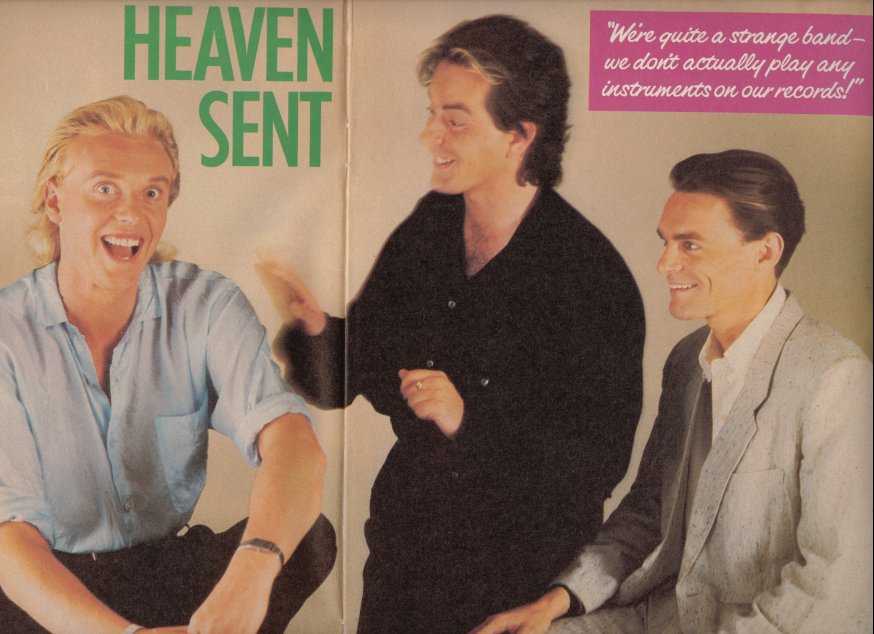 There's a lot more to Heaven 17 than meets the eye y'know.
For example, did you know that two of the three members,
namely Martyn Ware and Ian Craig Marsh, used to be in the Human League? O
r that the other one, Glenn Gregory once worked boning bacon?!
Interesting stuf, eh? If you want to know more, read on ...

All three of them were born in Sheffield. "And that's where we all originally met up," lead singer Glenn told us.

These days though, for convenience sake, they all live in London.

"When I first moved down here I got quite a shock," Glenn remembers. "There's so much to do in London, there are so many clubs, whereas the nightlife in Sheffield is non-existent!"

Not that they spend all their time having nights on the town, you understand.

"We've actually been working quite hard recently," Glenn reckons. "Our new album, `How Men Are' took us 7 months to make."

Most of that time was spent 'arranging' things on the album.

"We're quite a strange hand really, in that we don't actually play any of the instruments on our records! We leave all that to brilliant session people!"

The group get a lot of their sounds from synthesisers which they programme to do exactly what they want.

"Oh and we write all the stuff and I do most of the singing!" adds Glenn.

When they're not working the boys amuse themselves in various ways. Martyn recently took his wife Karen on the Orient Express to Venice. Glenn passed his driving test and celebrated by buying a jeep. Ian enjoys walking and hopes to take part in a marathon. But one thing they all really enjoy is making home movies.

"They get really silly and out of hand," Glenn has admitted.

"We get all our friends together, take turns in holding the camera and make up some ridiculous story as we go along!" Sounds interesting!

As well as being in Heaven 17, Martyn and Ian also have a company of their own, called the British Electronic Foundation, commonly known as B.E.F.

"It's mainly a production company," Martyn points out.

Past projects include an album called `Music Of Quality And Distinction' which featured well known artistes singing cover versions. For example, Bernie Nolan tackled the old Supremes hit 'You Just Keep Me Hanging On', and did it pretty well, too. Martyn and Ian were at the controls producing the whole lot.

"More recently I've been working with Tina Turner and Billy Mackenzie from the Associates," Martyn added.

Apparently Bette Midler wanted to use him as well but Martyn felt he just had to turn that one down!

So, as you can see, there is definitely more to Heaven 17 than meets the eye!