News Beat - You Ware it well 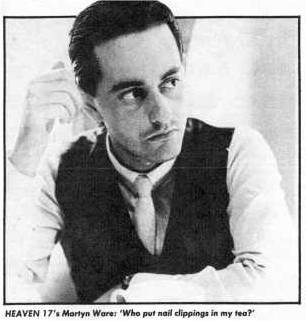 THESE THREE men belong to neither pavement nor penthouse. Instead they've grown comfortable by the fireside. Heaven 17, Martyn Ware, Ian Craig Marsh and Glenn Gregory, are all in love. All three have temporarily shelved the joys of nightclubbing for the delights of domestic bliss.

"In Sheffield, we'd go out every night," explains Martyn. "Nothing would happen during the day so there was no reason to stay in. In London, you've got all these options, so many that you find you like to stay at home with a few friends and be private. Clubbing can get out of control, you end up gibbering all night to acquaintances, not making any sense and feeling tired in the morning."

London's size has come to suit Martyn Ware: "I do prefer the facilities in London. A lot of people have the misconception that London is nothing but nightlife. People assume you've become part of a bland, decadent and pointless society. But here you've got more facilities for making your own life. You can have a larger circle of friends and a 24 hour life.

"It's easier to be anonymous than somewhere like Sheffield. We're not that well known but we do have freedom in London. Phil Oakey's had to move to somewhere in North Derbyshire since the success of the Human League. In London, people might recognise you but they still let you be.

IAN AND Martyn's last project, BEF's 'Music Of Quality And Distinction,' was a distinct disappointment, both in the grooves and in the sales. Can the boys spring back?

"For two months after that, we didn't do anything. Partly because we'd been working so hard for so long, partly because we were so disoriented. Perhaps we approached the album in too highprofile a manner: People should have heard the album for themselves instead of hearing about our ideas about the record. We went for broke with that album and it didn't pay off."

Fortunately, Martyn and Ian didn't depend on that album for a safe financial future. They had points on their old group's new record, a record called 'Dare'. As a result, they can step aside from the 'hit or bust' syndrome which the industry currently enforces.

Using these royalties, the pair have bought new stocks of equipment and set about the new Heaven 17 record. Already they've recorded two singles, a current release 'Let Me Go' and a possible follow-up entitled, 'Crushed By The Wheels Of Industry'.

Heaven 17, like the rest of Martyn and Ian's projects, are committed to music of quality and distinction. Unfortunately this seems to make them too aware of music's production to make anything inspirational. 'Let Me Go' is a worthy enough telling of the 'Heaven Can Wait' story but it lacks excitement, character, extremity. Heaven 17's selfconscious awareness of pop's conditions of production hasn't helped them. They introduced the business suit into pop, ABC and others have profited by them. Perhaps the three are so busy maintaining quality and distinction, that they've failed to make that blend of commerce and lunacy that is great pop. "I wouldn't like to think that we've gone so far out in a desire to make it that we'd abandoned artistic interest," says Martyn. "Soon as you regard pop as a straightforward business, you're on a losing wicket. We do have a fundamental taste barrier."