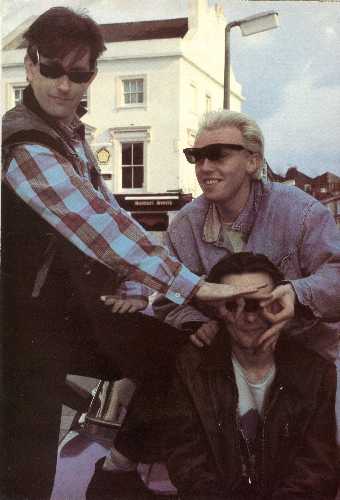 HEAVEN 17 are depraved. This fact will already be well known to regular readers of Flexipop!, who will no doubt recall the interview with the group which appeared in issue 24, and succeeded in winning them the coveted accolade of 'Smuttiest Group of the Year'.

However, for those unfortunate readers who missed that historic interview, perhaps a few words of explanation are in order. I mean, a lot of you are probably still labouring under the misguided impression that Heaven 17 are a group of decent, upstanding young men whose street-credibility is unimpeachable, whose music demonstrates an acute awareness of post-Capitalist-ethic form, and whose intellectual abilities are equalled only by their insights into the problems besetting modern society. Or, in other words, a lot of you have probably only read interviews with them in NME, Melody Maker or Smash Hits.

But, yer see, it's only Flexipop! which refreshes the parts that other publications don't even wish to know about. It was we who first revealed Martyn Ware's intimate involvements with a genital-surgeon, Ian Craig Marsh's obsession with donkeys, and Glenn Gregory's embarrassing understain problem.

How do we do it, you are probably wondering. What sneaky, underhand methods do wt use in order to get perfectly sane and respectable people to make complete tits of themselves?

Well, now for the first time, the truth can be revealed:

The venue is a cafe, where Heaven 17 are enjoying a quiet lunch, and awaiting an opportunity to talk about some of the important issues of the day. I let them ramble on for a while, to gain their confidence.

Then I make my first assay - I ask them if they had any reaction following their last appearance in this magazine:..

"Well, to tell you the truth, we were expecting to get a lot of hate mail after doing that last piece in Flexipop!" says Martyn, "But as it turned out; we didn't get any. W e were very disappointed."

"So what angle can we take for this piece then?" asks Glenn, "I mean, I think we just about said everything there is to say on donkey's knobs and (CENSORED) in the previous article, which, incidentally my mum hated. So what is there left to do this time?"

(Note the way in which I am leading them on at this point, like lambs to the slaughter ...)

Well, we'll have to talk about something that ties in with the photo"' says Glenn, "What sort of picture did you have in mind?"

"I was thinking," says Neil, the photographer, "If we can get hold of some plates of spaghetti, maybe we could cover you in a mound of it and...

"Hmmm, not too wild on that idea," says Glenn, "How about us being Flexipop!'s 'Wrecks of the Month'? We can just laze in a corner and look really ill."

"Or maybe we could cover you in chocolate mousse," ventures the irrepressible Neil.

Difficult... " reckons Neil, who seems to be making himself rather unpopular at this point.

"All right then," says Ian, "How would you like it if we bang things against our heads until they bleed?"

"Or we could stuff oranges into our mouths..." suggests Martyn. "Or, maybe we could go into the street, find some doggy dirt and rub it into our faces. You could have a great headline -'Shitface'."

"What about doing this?" says Neil, who then demonstrates a meaningless and utterly foolish gesture with his fingers around his eyes.

"And I'm not doing it," says Martyn, "But I'm prepared to compromise. You can take a normal photograph of us, and then you can go like that with your fingers and stick it over our eyes to make it look as though we were doing it."

"Or you can take a photograph of our hands doing that and let the readers stick them on," suggests Ian.

My first efforts, I admit, failed abysmally, and we ended up having a thoroughly sensible discussion about music, left-wing politics, modern technology and the futility of warfare.

Now, since all of these subjects are clearly well beyond the mental capacities of the typical Flexipop! reader, I started off on another approach...)

"Know any good jokes?" I said in an off-hand manner, as if this wasn't part of the interview really, so there'd be no danger of it being printed (I'm a sly bestard at heart).

"Yes, actually, I do," says Martyn, "And I've got no worry about you printing it because its far too obscene..." (God. how simple can you get!)

`You see, there's this woman who's been devotedly married to her husband for the last forty-six years, and anyway, he falls ill and eventually dies, Now, she's obviously distraught by this, so she goes to the embalming parlour where she sits by his coffin paying her last respects, gushing with tears. And then the guy who runs the place comes in and he says, 'Fm so sorry. Is there anything I could possibly do to alleviate your suffering?' and she says, 'Could I possibly have his, er... thing?' (EditorialNote: For the purposes of the Obscene Publications Act, the 'thing' in question maybe deemed to be a cucumber)... and the guy, naturally is shocked, so he tells her, 'No, I'm afraid we can't do that,' But she goes on, 'Oh, please, please, please.. . you see, it would give me something to remember him by.'

"So, eventually, he begins to feel sorry for her, and so he cuts it off and wraps it up for her to take home. Once she gets home, she goes into the kitchen, unwraps the aforementioned object, gets a very sharp kitchen knife and proceeds to chop it up. At this point, the maidservant comes in. She's totally and utterly horrified, and she says, 'What on earth are you doing?' To which the woman replies..." Well, what does she reply? Answers please on a postcard to 'Dirty Jokes', Flexipop!, 80 Bell St, London NW I. An album for the funniest punchline.

"There, I told you you wouldn't be able to print that!"

And then, as though by a flash of inspiration, a horrible thought occurs to Glenn, "You know, I reckon they just might print it after all. You know what they're like. .."