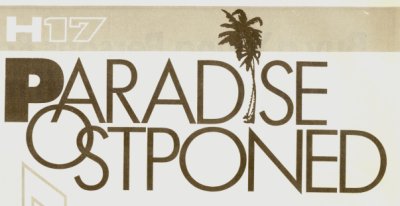 Remember the new pop dream? Remember how HEAVEN 17 were establishing new standards meant to banish the dull and drab forever?
Whatever went wrong? The Sheffield men return with a new album and some answers for Simon Reynolds

I'M talking with those nice men from Heaven 17. The group has returned, Lazarus-like, from a protracted period of quiet. How had they managed to exile themselves from the public eye for two years?

"We've been messing about getting things wrong," explains Glenn Gregory. "We went to Paris to work on the soundtrack for a sci-fi film called 'Unique' last year. It took up about four months of our time and it came to nothing. Turned out the production company, Belle Rive, didn't have the dosh."

Martyn Wore continues: "We didn't exactly come out of the business out of pocket, but there was a lot of mental disruption - we interrupted recording this album to do the soundtrack - and a waste of productive time. It lowered our morale and motivation for quite a while afterwards. It took us a while to get back into the swing of things."

Ian Craig Marsh: "But now we're raring to go. And it won't take so long next time. The next LP after this will be out next spring."

So they're back, with a bright and breezy new long player called "Pleasure One", plus punchy single, "Contenders". This time round they've ditched the synthetics that were their forte and their mark of difference, in favour of a more organic sound, courtesy of a clutch of session persons. It's a glossy, busy-busy pop-funk, all chunky slap-bass and zing-azing flecked guitar and stetchy Earth, Wind & Fire horns, zestful but a little old-fashioned next to state-of-art electrofunk like Janet Jackson.

Martyn Ware: "It's not such a major shift for us. We've always used live guitars and bass before, it's just that, until now, we've relied on electronic percussion. On this record we've got real drums hit by real people, So we're moving in the opposite direction to everyone else."

This, I suppose, is a kind of valour - to go against the grain of pop, when to go with it is to make a packet. Do Heaven 17 feel cruelly treated by pop? They've been innovators but, somehow, other, lesser spirits have reaped the benefits.

"It's just that three or so years after 'Penthouse And Pavement', it became fashionable to make music that sounded like what we used to sound like. But we've never wanted to sound typical so we've moved on."

Can they be content with being ahead of their time?

"We'd rather be where we are," says Glenn, "than up there for a while and then down there for good."

Martyn adds: "Anyway, being influential does pay you back. We've got a lot of respect, which would come in useful if we ever wanted to sign with another record company. They'd want us because we're obviously not just another pop creation. We're creative, not created." 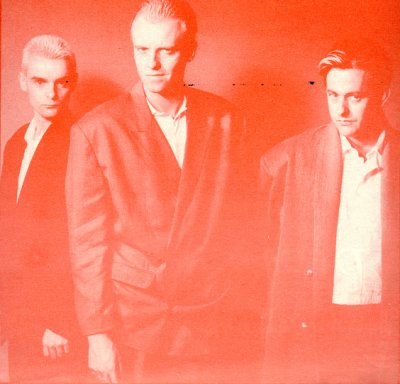 WHEN it came out in 1981, "Penthouse And Pavement" seemed important. No one had done this before. This stern white funk, these pop essays on "micro-macro politics", were a new thing. Glenn Gregory's voice - the wooden heart of Heaven 17 - was the element' that cast an aura of irony over the proceedings,' the lock that wrapped wry quotation marks around' every statement. Ian Penman's description still stands: with Heaven 17: "There is no beauty,, only accuracy , Precision-funk, precise dissection of social tension, aspiration and anxiety. And "Penthouse And Pavement" seemed important because it seemed to bee part of this bottleneck of brilliant things that just had to break through into the main hobbling beat and dependence on the borrowed fire-power of Carole Kenyon, loathed the ponderous dirge "Come Live With Me". Only the sleek shudder and thwack of "Crushed By The Wheels Of Industry" appealed.

"How Men Are", the third LP, arrived just at the point when we'd overdosed to the point of nausea on white funk and irony. Critical support was severely lacking, lost to a resuscitated Rock. Even the public was bored. The singles stiffed.

Now Heaven 17 are back where they started, having trimmed off superfluous decoration and returned to a tout economy. Everything in their sound pushes forward, nothing is baggage. "Trouble" and "Low Society" are as good as almost anything they've done. So why does it all seem less?

Because of the absence of a context within which to frame them, the dissipation of that New Pop rhetoric, with its sense that everything stale was just on the point of being displaced, irrevocably, by the Bold and the Bright. Without that forward drive, without that bustle, we have only Heaven 17 - another good group.

What seems to have happened is that the substance of New Pop - dance and colour and post-rock texture - survived, shorn of its spirit of ambiguity and risk. I mean, once upon a time we had The Associates in the Top 20 ...

Martyn muses: "I think at that time there were more things happening, and we were part of that. What happened then was that the record companies put out inferior copies, more accessible versions by more compliant groups, and that led to this current bland-out. It's all due to marketing. There's no real encouragement to do anything different these days. Today companies won't take on a band without single potential, for instance ... even in the 'bad old days' they had album bands. These days all that's allowed is what you can sell on 'Saturday Superstore'."

Glen: "I mean ... Roland Rat. Imagine being interviewed by Roland Rat. I don't think I could take that seriously. I'd keep looking underneath to see how he was being operated!"

One idea of Heaven 17's that's received a new lease of life is the idea of expanding the simple pop group into a corporate organisation involved in a proliferation of moneygenerating projects. I'm thinking of the way Tony James' Sputnik Corporation echoes their British Electric Foundation.

Martyn: "That B.E.F. idea was a means of administering the group, but it was never intended as a statement or model. We never sought the image the music press foisted on us."

Poor pop writers, guilty (some of us at least) of trying to make things seem MORE than they are.

"The B.E.F. thing was a oneoff idea, really just an idea for the sleeve of 'Penthouse And Pavement'. It was based on this advertisement Ian had seen. We intended it as a joke undermining that myth of the rock star as tortured artist, to reveal the way pop is actually a highly organised business machine for making money."

What do you think of Sputnik?

"I think they're totally witless - not stupid, but wit-less."

Sigue Sigue Sputnik are a contextual joke only: it's shocking in a music press context to talk nakedly of your desire to make loads of money, of your willingness to lubricate an accommodation between advertising and rock in the service of global behaviour control and profitability. It's shocking to embrace brazenly the calculation in rock manufacture and marketing. But outside, in the real world, ruthless competivity and megalomania are the norm, exactly what it takes to get on. Sputnik flaunt only an utter conventionality.

Heaven 17, on the other hand, paradoxically assume capitalist psychology in order to pick apart conventional aspirations and fears. "It may help to increase awareness even if only in the tiniest way ... We're all good Socialists. We all remember what it's like to be poor ... especially this last year!"

THEY'RE back, and trying their hardest to make that BACK! with an exclamation mark and a vengeance. "We've done a Sheffield Wednesday song under the assumed identity of The Hillsboro Crew. It's radically different from your runof-the-mill footer record - like Mantronix meets the Barron Knights."

They are nice men, Heaven 17, as I realise when the mutual reserve thaws a bit (this is their first interview for two years, bar The Falmouth Packet) and I learn about Glenn's pair of whippets and Ian's live-in labrador and Martyn's habit of dreaming songs, complete with lyrics and arrangement. I wish them well.