DO YOU REMEMBER THESE MEN ?

Well, let us jog your memory. This is Heaven 17, and although they've had plenty of hit records, they reckon they're forgotten men of music. Now they're contenders again... 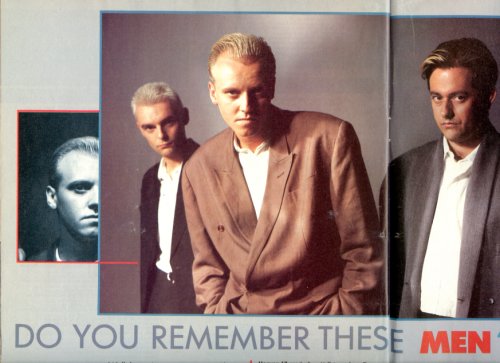 Heaven 17 are the Barry McGuigans of pop. They might lose a couple of fights, but they'll always come back, no matter what the cost. Their latest single is aptly called 'Contenders', a punchy little number delivered with the gloves off.

'We're the forgotten men of music," says Ian Craig Marsh. "We keep a low profile, but we're always around, ready to come back at the right moment."

'We've never been a band who will sacrifice artistic credibility purely for commercial success," says Martyn Ware. "How much money do you need to live on, anyway? We're comfortable, but we could have made our fortunes just by trotting ideas out. Music is still a great craft to us, it's something we really enjoy doing. Our souls are still in it.

'We don't go about music using the Bananarama method. Where's their credibility? The charts aren't particularly exciting at the moment. There's a lot of recycled white American music around, but the black music that's happening is interesting."

With 'Contenders', Heaven 17 hope to re-establish themselves after the disappointing result of their teaming up with Jimmy Ruffin on 'The Foolish Thing To Do' a few months back.

"Contenders was a word we had written down on a scrap of paper," says Glenn Gregory. "It's a very strong word, isn't it?"

"It's about the way the superpowers are constantly squaring off against each other," explains Martyn. "Look at all the struggles going on in the world, they're trying to carve the place up; everybody wants to be a contender, but at the same time they're not dealing with the real business.

"It's difficult for ordinary people to discover the real truth behind what's going on. We're told the Russians want to take over Britian - but why should they want to? Is there any evidence they really want to do it? We hear they're an aggressive power because they went into Afghanistan, but the issues in Afghanistan are much more complex than the media report.

"I'd like to see the nuclear bases in Britain shut down, like the Labour party says. In fact, I'd like to see Britain become neutral just like Switzerland. Britain still has the old colonial spirit. We still haven't forgotten the days when we'd go out and bash anything that moved over the head.

"It's the nuclear club thing," says Ian. "You've got to have your designer nuclear weapons to look big and chic."

Now, you're probably beginning to think that Heaven 17 are turning into one of your worthy, pofaced bands. But fear not, the message of the song is thrashed out through a stonking good dance beat complete with real drums and real guitars. Watch out for the video, as well, shot at great expense in California.

'We used 50 black dancers," explains Glenn. "They were doing all sorts of crazy things, lots of breaking and making shapes all over the place. During one part of the action, they got me to do a back flip. It was a reverse somersault and they caught me. I was really worried about that one. I thought I was going to do myself in.

"Yeah, with the title of the single being 'Contenders', it does hint that we would have done a Frankie-type video. World leaders and all that taking each other on. But we wanted to get away from those ideas as much as possible. I did some of the shooting for the video myself, zooming in and out on the camera. Between shooting, I was really pleased because all the dancers asked for the single to be played so they could listen to it. They enjoyed it so much, and I hope it's a good sign that the record is going to be big in America. These days we'd like to sell even two records there."

So let's hope that 'Contenders' repeats the dancefloor success Heaven 17 had with 'Fascist Groove Thong', a monstrous dancefloor smash in America. Certainly, Heaven 17 enjoyed the States, if their sun tans are anything to go by. Glenn's even developed quite a passion for Van Halen.

"I'd much rather go and see a Van Halen concert than a Spandau Ballet concert. I wouldn't buy any of the records, but I do appreciate that element of rock theatre. I like the idea of people who still go around wearing stack heels and aren't afraid to make wallies of themselves for the sake of entertainment."

Glenn also popped into Disneyland to see Michael Jackson's 'Captain EO' video. "It's 15 minutes long and cost a million dollars a minute. It's 3D so you have to wear special glasses. The effects are tremendous. You see this spinning meteor coming towards you and it looks like it's completely real, so you duck to get out of its way. Michael Jackson looks so lifelike as well that you could grab him and kiss him. Nice."

Back from America, Heaven 17 are now getting down to the serious business of promoting their single and an album is on its way. "It's going to be called 'Pleasure One'," explains Martyn. "It's going to have a direct hedonist vibe. It's not going to be intellectually obtuse."

Hmm, well, I think I understand what he means.

Certainly the album has some darn fine tracks. On the preview tape I was given, the stand-out tracks are 'Move Out', 'Trouble' and 'If I Were You'.

"I think Glenn's voice is unique," continues Martyn. "I think there's a sense of identity in his voice which is virtually unmatched in Britain today. It stands above most others."

Over the years, Heaven 17 have become quite renowned for working with other people. There's been Glenn's collaboration with Claudia of Propaganda and the work with Tina Turner, but now Martyn is planning to do something truly bizzare - a football team single! He's working on one for his favourite team, Sheffield Wednesday.

"It's going to have lots of rapping. It's an interesting idea and will get away from the notion of your typical football record. I don't know if I'll ever live it down, though."

Martyn's also getting interested in his wife's career as an up and coming pop star. She's in the band Kiss That, and Martyn goes to all their gigs. "I think she just didn't want to be known as Martyn Ware's wife, but wanted to have a career in music herself. I like what she's doing and it's interesting for me to see the development of a young band first hand."

I think record companies have become very product orientated," chips in Glenn. "I think they're even more obsessed with money than they have been before. There doesn't seem to be too much time for the artist to develop."

"More power to Sheffield, it's always been a creative place. You have to be creative to try and get out of the place. No, I don't mean it really. It's very nice."

'We wish the League well, " adds Martyn. "'Human' is a very commercial single with superb production. I think they owed it to themselves to do a single like that. I met Joanna again the other night and she was looking very chipper, very bright."

"There was a real meeting of the Sheffield Mafia when we all went to Martin Fry's wedding," Glenn says. "It were a real good do."

"Sheffield's not as hip as Liverpool," Martyn explains, "but I think bands from Sheffield have a greater sense of humour. I mean, look at all that ABC stuff: a lot of it is very amusing."

And with that, Heaven 17 are heading back to their second home - the studio. If you want to see them touring this year, you're going to be disappointed. While some bands positively itch to get out on the road, Heaven 17 remain untempted even after their five or six years together. 'What we did think of doing was having a Heaven 17 hit squad composed of Heaven 17 lookalikes," says Glenn. 'We could put them out on the road instead of us and nobody would know the difference. John McGeoch out of Public Image has said he'll do it.