THE RIGHT THING TO DO

Take one seasoned soul singer (Jimmy Ruffin) and the three clever boys from Sheffield (Heaven 17).
Stir, mix in a track called "The Foolish Thing To Do" and discuss, quietly ... 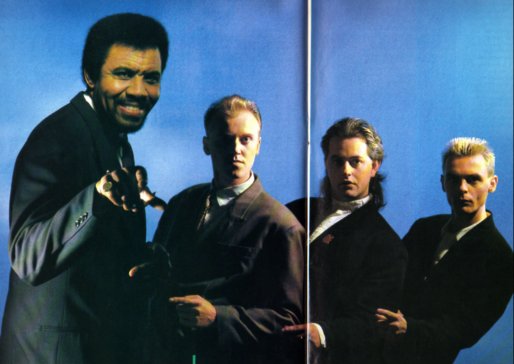 They're all doing it. Glenn Gregory's been doing it more than most. He's done it with Grace Jones, with Claudia Brücken, with Midge Ure, and now he's done it again.

What were talking about here is collaborating. It's got a lot to do with last year's rash of political and charitable pop groupings, but it goes further than that.

Jimmy Ruffin, Glenn's latest partner in crime in the slow-burning Heaven 17/ Ruffin ballad, 'The Foolish Thing To Do', has got a theory about it.

Jimmy: "The businessmen, the radio people, and the marketing people try to keep the musicians separate. They need their categories so that they can divide and conquer. Now, the creative people in the Business have become more and more aware of this, and they're starting to work together, to keep the music alive."

Which is one way of looking at it. On the other hand, the appearance of oddball combinations like Duane Eddy and the Art Of Noise, or even UB40 and Chrissie Hynde, seems to speil 'marketing gimmickry', rather than 'musical integrity'.

In a Chart stacked high with Big soul ballads and revivals from Billy Ocean to Whitney Houston, from Sam Cooke to Marvin Gaye, you'd be forgiven for thinking that Heaven 17's Glenn, Martyn and Ian were trying to elbow in on a trend. This week's special offer.. .

Glenn: "I don't think it's a concession to any fashion or fad, it just happened. We wrote the song for a French film that we were doing Some music for, and they wanted it in a certain mood."

Martyn Ware: "It was done a year ago, anyway."

Glenn: "Martyn knew Jimmy from the Council Collective, the Soul Deep thing, so he cheekily phoned him up, and asked him if he'd do a guide vocal for us. It turned out that the girl who was supposed to sing it in the film couldn't cut the cheese in the Studio, and the vocal that Jimmy did was just so brilliant, anyway."

Jimmy: "When I got the song from Martyn, Iknew it was a better song than he realised. I thought right, I will sing this sang so well, that this girl won't be able to do it. It was like, OK, 1 don't mind doing a guide vocal, but it'll be so good that they'll have to use it."

After a six months wait, during which time the film project feil through, Martyn decided that 'The Foolish Thing...' was a little too good to waste, and a little too, er, smouldering for Mr Gregory's voice.

Martyn: "It's obviously not in the Heaven 17 style, and we couldn't really envisage putting Glenn's voice an it. It would have been pointless, especially after Jimmy had done what appeared to be the definitive version."

Jimmy: "The song is a type of Song he couldn't have done. You have to..." Glenn: "You have to be black, or George Michael. It just sounds like an old song that somebody's covered. I want

Frank to sing it at his next Las Vegas gig,.

Jimmy: "It's that kind of song, that's how I heard it too, coming from my background, which is described as 'soul', but nobody knows. It's always intellectuals who define the music, who don't know f**k all about it."

Jimmy: "I just hear it as a big classical song from the past. Kind of Billie Holidayish."

Martyn: "I always liked him."

Glenn: "Yeah, he was good." Jimmy's involvement with the Heavenly trio of Glenn, Martyn and Ian

Craig Marsh represents something of a return to the mainstream for the Mississippi born singer. After his 1980 British hit, with the Robin Gibb-produced 'Hold On To My Love' he went into semi-retirement.

Jimmy: "I was fed up with the business side of it all, and with people putting me in bags. Most people hear me singing 'What Becomes Of The Brokenhearted' forever. They forget the other records. I mean I love the song, it's got nothing to do with the song, it's just that was all people were seeing me as.

"I haven't had a lot of product on the market, sometimes because of business transactions, and sometimes because of pride. Some things I just won't compromise on, because of ethics. If I know I'm getting screwed in a deal, I could be starving, but I'd still turn it down. You're not supposed to do that."

After spending the early Eighties writing, and catching up on his various children. Jimmy decided it was time to give it one more push.

Jimmy: "I realised that I owed it to the public, and I owed it to myself. It was time to get up and start to boogie. I decided that my voice was a gift, and I should share it with those people who enjoy my singing. And I kept looking at the charts, and thinking ... there's no-body there who sings like me."

Which is a sentiment that the magnanimous Glenn `Green' Gregory appears to go along with.

Glenn: "I'm not jealous about me not singing on the single, but I'd like to have a voice like James Ruffin."

"No, seriously, there's a certain quality about the way he sings, and it's the same with a lot of English pop singers. The interpretation and the phrasing is really pleasing to the ear."

Martyn: "It's like all the white boys want to be black, and vice versa."

Mr Ruffin doesn't seem too sure about Martyn's assertion. Jimmy: "I'm from Mississippi originally, so the truth is that I'm a different kind of black guy. I grew up with a lot of white friends. I didn't grow up with racist attitudes, I didn't grow up feeling inferior, which in America is still pretty difficult for a black per-son. The mass culture doesn't accept you as you are.

this right hand has shook a few people's hands who aren't here any more because of doing it."

Having made it big as a Motown star in the Sixties, Jimmy has had many a brush with the seamier side of showbiz.

As Martyn, Ian, Glenn and his pet greyhound, Oscar, sit back in their seats, Jimmy takes us on a quick tour of those hazy days.

Jimmy: "I came up in the Sixties when dope was everywhere. This was real 'freedom', you know, and I've had all types of things thrown at me.

"Friends get you into those things. I remember seeing Marvin Gaye over here in 1980, and he offered me a blow of cocaine in a hotel. Then he remembered; he said, `You don't blow, do you?' I said 'That's RIGHT, Marvin'.

"He was having a lot of problems at the time. Back when he was having all the hits, I used to think, boy, he's got it made. Then I saw him in 1980, when I had a hit with `Hold On To My Love'. He said to me that there was one line which really made that song for him. I said, 'What?' He said, `That line, "I'm nothing". That always sticks in my mind."

Apart from his monstrously loud choice of shirt, Jimmy seems to have been quite unaffected by the rough and tumble of his past. Brimming over with enthusiasm, he even suggests doing a major tour with Heaven 17. Glenn and Co. shuffle their feet. They'd rather talk about their nearly finished album. Glenn wants to call it 'Pack It In'.

Glenn: "That doesn't have to mean 'jack it in', though. We've actually put most of the tracks down live, like a real band, which we've never done before."

Martyn: "But then at the same time, we've never claimed that we actually played a lot of the stuff. We always credit the guitarist or whatever."

Glenn: "It's just like we're in a band, but we're the only three that people see. And I DO sing."

Simple, really. Take a voice, a mood and a week's studio time. It's just a mat-ter of packaging the correct ingredients, as they say at Kelloggs. Right, Jimmy?

Jimmy: "Companies are not interested in building acts any more. All they're interested in is images and product. The music business was taken over by the multi-nationals, the Coca-Colas of the world, and it just became business as usual. They treat it like selling corn-flakes."

Glenn: "Jimmy Ruffin and the Corn-flakes."

Jimmy: "And if you want to survive, you've got to get your packet together. You've got to say 'EXTRA SPECIAL!' and 'BRAND NEW!"

Glenn: "On this record, we should have put `Fifty Per Cent Black!"

Martyn: "This week's special offer." Sweet, dark and effervescent - Heaven 17 plus top quality James Ruffin, in 'The Foolish Thing To Do'. It's the real thing.