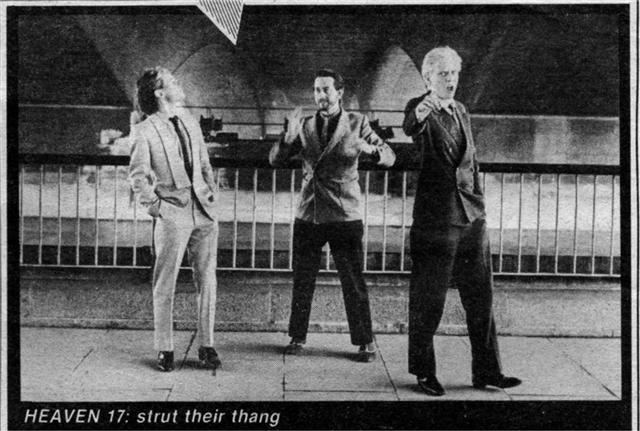 YOU'D HARDLY expect thanks from the powers - that - be for releasing a record whose very lyrics decry racism and fascism and describe Hopalong Reagan as a `'fascist god", now would you?

But it's not just lack of airplay that's stopped `(We Don't Need This) Fascist Groove Thang' from making anything more than a small show in the Charts (still outside the Top 50 after Tour weeks) - Heaven 17 have also fallen foul of the IBA. Adverts, even for Heaven 17 records, must be "legal, decent, honest and truthful". Apolitical too apparently and since `Groove Tang' is clearly anti - fascist . . no show.

Not that they seem at all perturbed by the events; matters are in hand.

Virgin, their record company are attempting to make the issue a debating point in that hotbed of sixth -form tomfoolery laughingly known as the House of Commons, while a slightly altered version of the record (in which President Rot' Rogers becomes "Cowboy god" rather than "fascist god"} for those sensitive little radio people shluld ensure that the record gets the airplay it deserves.

Ian Craig Marsh and Martyn Ware, the two Human Leaguers whose acrimonious departure from that Set-up occurred some time ago. have now re-surfaced as the British Electric Foundation, a songv:; hing i production sort of thingy whose first offshoot is Heaven 17;

The group consists of our two Kernes plus singe: Glenn Gregory, the "hunky aspect of Heaven 17". who arrives halfway through my conversation with Marsh and Ware sporting a gaudily coloured Human League T-shirt. His co-workers double up with laughter in the midst of their chicken and corn galettes.

We discuss 'Groove Thang' between mouthfuls. A superbly funky piece of electronic lefty propaganda. it would appear to be a 10 on alt current scales of hipness. Was it written calculatedly, for that effect?

"No." replies Marsh. "but we thought at the time. this'll go down well with the press. lt started out as a piss-take of the whose Pop Group thing of political preaching to the converted. called `How Much Longer Can We Tolerate This Groove Thank'. then Martyn chipped in `fascist groove thang' - we thought it was hilarious. We wrote the words in a couple of hours.'

"The single, and the album for that matter, were recorded on an eight - track only!!" exclaims Marsh. "Compared to the average hit single. ours was recorded in absolutely primitive circumstances," he adds proudly.

Heaven 17 apart. BEF have an impressive Set of plans for the immediate Future following the release of their own `Music For Stowaways cassette.

Available in that form only, in a limited edition of 10,000, it's a collection of pieces of "ambient music. sort of like Eno without the pretensions. I mean, how could anyone take titles like 'The Decline Qf The West and 'Music To Kill Your Parents By' seriously?"

They may well team up with Cabaret Voltaire to record. and for with Clock DVA. Another possible collaborator is Gary Glitter (gulp). A Christmas single is planned already. and possibly some heaven 17 Bates, though emphatically not a Standard rock tour.' Other projects in the pipeline include an LP of cover versions - of 'quality and discrimination'. of course - including Lou Reeds `Perfect Day' and Glen Campbell's `Wichita lineman.'

You may take it that lack of ideas will not be holding back the Progress of the British Electric Foundation.