Re-Release in the US: "Designing Heaven" released by Dressed To Kill 27.Nov.2001

So here it begins, a sunny day. We're outside Martyn's house with all the equipment ready to go, having spent the last 12 weeks re-working and re-programming and re-arranging a selection of favourite Heaven 17 songs both old and new for the delight of out first ever audience.

Our first concert (I can't bring myself to say gig) is to be in Norwich. We're waiting for the tour bus ... oh God those two words... tour bus, such a picture springs to mind, you know those big, long, sleek, satellite T.V. bedecked, private room, stereophonic, fridge freezer, 14 wheeler's, that you've seen parked at the back of the City Hall every time you go to see a band. Well, what came around the corner, was certainly not one of those.

It looked like a big blue chip van, admittedly it had black tinted windows, but for heaven's sake it said "Good Rockin Tonight on the side. Oh well I suppose finally now after 17 years, we just might be about to enter the real world of rock and roll.

Standing back stage listening to our intro music I feel very nervous, but having insisted on doing two weeks rehearsals (weekends off naturally, no need to go too far) I do feel pretty much prepared both physically and mentally. All the lyrics memorised, and due to some uncharacteristic running my fitness was at a level it's not seen since I came third in the two hundred metres on a school sports day in 1975. Yes l was ready.

However the one thing I was not prepared for was the cheer and applause of the audience as we walked on stage, I couldn't believe it, all I kept thinking was "no way, this is a joke all these people it must be a set up". But no, the concert went really well, the audience loved It, in fact they seemed to enjoy it almost as much as I did.

One of the great things about playing live after a 17 year wait, is the fact that we get to go back and re-invent some of our old tracks it's made me really enjoy the music again. some of the early Heaven 17 songs I only ever got to sing three or four times in the studio, well maybe more if I was being particularly crap and untuneful on that day, but generally that was it. 0f course a real bonus for me is that we do a version of the Human League track Being Boiled which has always been one of my favourite songs.

Since that first performance, which was in April last year. we have performed in front of about a

million people, we've played most of the large Arena's in Britain, when we were guests on the Erasure tour and have played lots of other smaller venue's and clubs. We were also incredibly lucky to find two brilliant singers Angie Brown and Billie Godfrey who have really contributed to the whole Heaven 17 live sound.

So the question must be why did we wait so long to play live, and the answer must be...?

Whatever the reason I can honestly say I wish we hadn't waited so long because I absolutely love it. 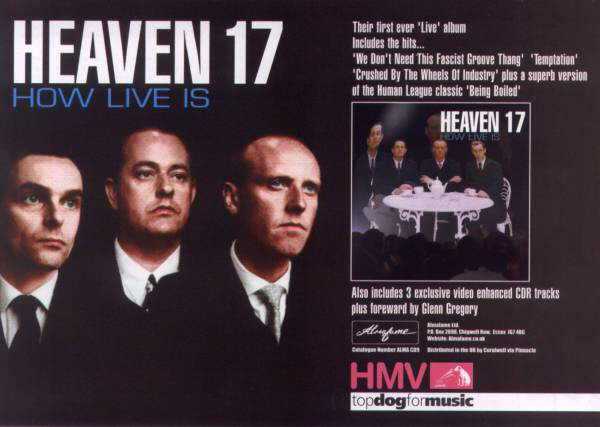